Born with a condition called a bilateral Tessier facial cleft, Zoe had a large gap where her facial features failed to meet during in utero development. On the left side, the opening in cheek reached her eye where she had no bottom eyelid. On the right, she had a split from her lips to the bottom of her eye socket.

“Doctors had told us to expect a unilateral cleft lip and palate, but what Zoe had was much worse than we expected,” says mum Jodie.

In addition to the facial cleft, Zoe was born with a hole in her heart, as well as one small and one large kidney. Though these issues resolved themselves with time, Zoe’s facial abnormalities required the skill of the RCH Plastic and Maxillofacial Surgery Department.

At five months old, Zoe underwent her first reconstructive surgery to close the gaps in her facial skin. At nine months, RCH surgeons closed Zoe’s oral palette, improving her ability to feed. At 18 months, bone was removed from Zoe’s skull to create new eye sockets, cheekbones and nasal bones. At three years of age, she had lip and eye surgery. By the time she was eight, surgeons had placed expanders under her skin to encourage additional skin growth. Four months later, surgeons removed the expanders and created a cheekbone with bone taken from her ribs. Two years later, bone was removed from Zoe’s hip and inserted into her mouth to hold her eye teeth in place. After that, surgeons used the tendon in her forearm to create a bottom eyelid and lifted her eye with a miniature titanium screw which holds the tendon in place.

As surgeries don’t grow like facial features do, Zoe will undergo several more surgeries until she stop growing at about 18 years old. Grateful for the amazing care she’s received at the RCH, Zoe hopes to pay it forward and become a doctor to help young people like her.

As a thank you for Zoe’s care, eldest sister Britney is ran 200km from Mansfield to the hospital, raising over $47,000 for the RCH Plastic and Maxillofacial Surgery Department. 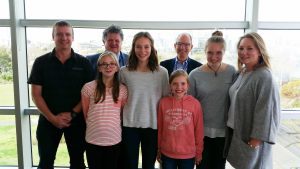