Australian parents are confused about the best way to register a decision about organ donation and many don’t know what their partner or child’s wishes are, according to new findings from The Royal Children’s Hospital (RCH) National Child Health Poll, made possible by your support.

The poll found that the majority of Australian parents are willing to consider organ donation for both themselves and their child, however most haven’t registered their decision on the Australian Organ Donor Register and only one in four parents have discussed organ donation with their teenager.

Parents said the leading reason for not discussing organ donation with their child is because they haven’t really thought about it (52%), they didn’t want to think about their child becoming an organ donor (21%), they thought it would be too upsetting for their child to talk about (15%), not knowing how to start the conversation (12%) and believing that there is no need unless their child is sick or injured (10%).

Promisingly, this poll found that children are raising the topic with their parents with 18 per cent of parents saying their child brought it up because they had seen it in the media or on social media and 15 per cent reporting their child had learnt about it in school.

Many parents are also confused about the facts when it comes to organ donation, holding misbeliefs such as a child might not get all available treatment options to save their life if they made a decision to consider organ donation for their child (36%), being concerned that a parent would not be able to spend time with their child after they have died and donated organs (40%), believing toddlers and pre-schoolers who have died are too young to donate organs (42%) and worrying a child would likely suffer in the donation process (32%).

Poll Director and paediatrician Dr Anthea Rhodes said “It’s very important for parents and carers to know that all efforts will always be made to save the life of a child, regardless of their potential donor status. A decision to proceed with organ donation would only ever be made once all lifesaving treatment options had been exhausted.

“Having a conversation about organ donation with your partner and children can be a difficult chat for a parent to have, however it is one of the best ways to for family members to understand each other’s wishes on organ donation.

“Registering a decision, whether that be a yes or a no, takes only a matter of minutes. Head to donatelife.gov.au to record your decision today.”

Visit donatelife.gov.au to get the facts on organ donation

Talk about what your own wishes are, and why 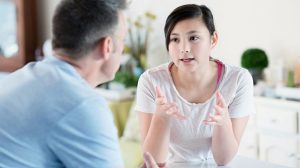