Eyeing off new visitors with a sneaky gaze while dwarfed by medical equipment, 14-month-old-Charlotte is a long way from home in Adelaide, yet parents Daniel and Simone are confident that they’re in exactly the right place.

“At first Charlotte just had a cold, but her breathing became strange and laboured, so we took her into our local hospital. Within a matter of hours, she had started turning blue, and was transferred into intensive care, where things very quickly got worse,” said mum Simone.

Charlotte’s body began shutting down, and the specialised team at their hospital in Adelaide quickly ran out of options to care for her. Luckily there was a lifeline to turn to in the form of the RCH retrieval team, who could place Charlotte on a portable extracorporeal membrane oxygenation (ECMO) device which could act as her heart and lungs, stabalising her long enough to bring her to the RCH for ongoing care.

“From the start, the doctors in Adelaide had been very open about the different steps of care available, with Melbourne being the final option. As we worked through high flow, then to intubation, and finally oscillation, both Simone and I knew that we’d run out of options. By that stage, her oxygen levels were dropping every 15-30 minutes, and it was a constant battle for the team. We knew Melbourne was where we needed to go,” said dad Daniel.

Once the decision was made, teams in both States quickly got to work. Phone calls were made, Charlotte’s condition was relayed, a plane was booked, and as the RCH intensive care unit prepared for her arrival, the specialised ECMO retrieval team prepared to board a flight to Adelaide.

Featuring a specially trained team of surgical staff including a perfusionist, cardiac surgeon, intensive care nurse and a scrub nurse, the ECMO retrieval team are on call 24/7 to retrieve critically ill patients from neighbouring hospitals to place them on essential heart-lung support. And through the support of a newly acquired, philanthropically funded portable ECMO device called Cardiohelp, the retrieval team were more than qualified for the journey.

“It was a situation that the whole team had been preparing for for months. Retrievals are an incredibly stressful process, not only medically, but also from both a practical perspective – ensuring that we have all the correct equipment and that we’re prepared to navigate through all the different transport variations, including multiple beds, ambulances and different kinds of aircraft. The new Cardiohelp device is compact, designed for travel, and meant that all of the equipment was ready to go. It’s also specially designed to fit securely into air ambulances and medical retrieval jets which makes the whole journey much more safe,” said RCH Paediatric Perfusionist Brad Schultz, who was part of the team for Charlotte’s retrieval.

And by the end of that day, the RCH team had arrived to bring Charlotte to Melbourne.

“It was incredible watching the Melbourne team arrive, it was like that scene from Monsters Inc. The rock stars had arrived to save our little girl, and we knew in that instant we were in safe hands,” described Daniel.

As the ECMO team got to work, Simone and Daniel went home to break the news to Charlotte’s seven year old brother Sam and start putting plans in place for an indefinite stay in Melbourne. Yet even then, they were aware of the significance of the new technology.

“When we met Brad he explained the care that Charlotte would receive, and that they were able to use a new device to help her. We were just grateful that they were here, yet we knew it was impressive when all the nurses were coming to have a look at it!” said Daniel.

Arriving in Melbourne, Charlotte was taken straight into the Intensive Care Unit at the RCH, where she stayed on the Cardiohelp device for the first week of her care. With a diagnosis of a superbug pneumococcus, an incredibly severe form of pneumonia, Charlotte’s lungs were unable to support her, and the RCH team had to turn to a new form of life support connection to support her lungs.

“Charlotte was only the third child at the RCH to be connected to ECMO via a berlin-heart style connection, which meant that we were able to connect the device straight into her heart, allowing us to support her lungs for a long period of time, if necessary. What makes our hospital unique is that all ECMO cannulations are completed by a cardiac surgeon, which has allowed for some great advances in care and collaboration between PICU, Cardiac Surgery and Respiratory Medicine, and meant that Charlotte could receive the best level of support,” explained Amy Johansen, Clinical Nurse Consultant and part of the ECMO Team.

In the four weeks following Charlotte’s arrival, she went through a series to surgeries, treatments, setbacks and small wins, and in that time it was a steep learning curve for the whole family. After weeks in intensive care, and living with other families across the road at Ronald McDonald House, they developed an incredible resilience, positivity, and acceptance of their situation, and were supported by some wonderful friends along the way.

For the tight-knit family of four, this was the longest time they’d been away from home, and the memories of happy little Charlotte following her brother Sam around the house, and trying to kiss their miniature schnauzer Monty all seemed like a long time ago, yet every day they were inspired by their little girl.

“It’s funny to be inspired by our little girl, but we really are. We know that we’re in for the long haul here, yet everything that isn’t a step backwards is a win for us. She’s a tough little fighter and we’re starting to get a couple of glimpses of her personality coming through, our little girl is slowing coming back,” said Daniel.

“We just want to say a big thank you to everyone. To the amazing teams at the RCH, and to the wonderful donors who helped fund the Cardiohelp device. It means the world to us. Thanks,” said Simone and Daniel together. 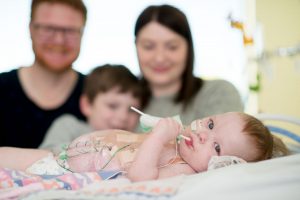