Australian parents are calling for tougher restrictions on e-cigarettes in an effort to reduce uptake in teens, according to new findings from The Royal Children’s Hospital (RCH) National Child Health Poll, made possible by your support.

Most parents have, however, discussed smoking regular cigarettes (71 per cent), alcohol and drinking (81 per cent) and other drug use (80 per cent), suggesting that parents are yet to see e-cigarettes as common place risky behaviour.

Poll Director, Paediatrician Dr Anthea Rhodes, said “The health harms of e-cigarettes are real. These products contain a multitude of toxins and chemicals, and they are still new so the full extent of their potential harm is not yet known.”

“Recent cases around the world have shown that using e-cigarettes can have devastating impacts on the health of teenagers and young people. More than 60 people worldwide have now died from vaping related lung injury and thousands more have become very sick,” Dr Rhodes said.

“This study shows that many parents believe that if a product is legal it must be safe. E-cigarettes are not safe for teenagers and efforts should be made to educate people about the risks,” Dr Rhodes said. 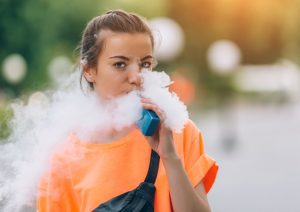