With a cheeky grin and a passion for all things trucks and cars, it’s very unlikely that two year old Jack will have any memory of his rough start in life, and the months spent at the hospital, but it’s something that his parents Michelle and Trent will never forget.

“Jack is our first child, and despite a smooth delivery, alarm bells rang when Jack hadn’t passed his meconium. We were in the Emergency Department shortly after,” said mum Michelle.

After a series of tests, Jack was urgently admitted into the Butterfly Ward (Newborn Intensive Care Unit) at the RCH. That’s where the family first met Associate Professor Sebastian King and started learning a new vocabulary that they would quickly become very familiar with.

“From the moment we first stepped onto the Butterfly Ward we instantly felt like we were in safe hands. We completely trusted Sebastian and he took us through everything step by step, and made sure we were comfortable and informed throughout the whole process,’’ said Michelle.

For Jack, the process started with the diagnosis of Hirschsprung’s disease, and a series of tests to determine the full extent of the organ damage.

“Hirschsprung’s is a condition which causes the large bowel to be formed without nerves, which means the bowel isn’t able to function properly. Unfortunately for Jack, more than 70 per cent of his large bowel was affected. This meant that I needed to initially form a stoma (where the bowel is brought out to the skin), then I removed the section without nerves, and joined the remaining normal large bowel to his anus,” said Sebastian.

For first time parents, this was a lot to take in. For the majority of Jack’s first year of life he had his stoma, until he was big enough for his definitive surgery and then stoma closure a few months after that. His family quickly fell into a routine of closely monitoring his health, measuring the stoma outputs, and keeping up with his medications and care.

“It was difficult to not immediately turn to Google and potentially spiral into the unknown; instead, we put trust in the amazing team at the RCH. We also had the incredible support from our family, who filtered research information through and who supported us every step of the way,” said Michelle.

And those steps were steep. Due to the rarity of Jack’s condition, there is little knowledge in the community about how to manage potential complications. When Michelle would have questions about Jack’s diet requirements, specific immunisations needed or whether his behaviour was ‘normal baby development’, all healthcare providers deferred back to Sebastian.

“Sebastian was an incredible support throughout that first year, but increasingly as we had more and more questions, we started to feel bad about constantly having to turn to this amazing, highly in-demand surgeon for questions which may or may not be important”.

This is where the Colorectal and Pelvic Reconstruction Service becomes invaluable. For families like Jack’s, they will now receive a holistic, exceptional care throughout their whole RCH journey. By providing families with a dedicated nurse to answer all of their questions, and to provide psychological and social support to families, they’ll be best empowered to take control of the care of their loved ones.

“Having been on this journey for two years so far, I have no doubt about the immeasurable impact this will have on families like ours. Having someone on call who understands the patient background and the intricacies of conditions like Hirschsprung’s, who can support both the patient and the parents, will help families be so much more comfortable and confident; it’s a wonderful initiative,” said Michelle.

For Jack, his RCH journey is still just starting, and with the help of the Colorectal and Pelvic Reconstruction Service, his family is confident that they’re in the right hands for Jack’s journey ahead. Until then, they’re focusing on keeping Jack happy and healthy, and enjoying life with him. 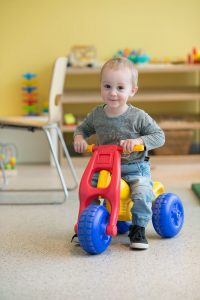 Learn more about the Colorectal and Pelvic Reconstruction Service