Thanks to the generosity of Henley Homes, Villawood Properties, their skilled tradespeople and suppliers, the sale of the Good Friday Appeal Charity House in 2021 will be supporting Clinician Scientist Fellowships at The Royal Children’s Hospital (RCH).

The RCH attracts the best medical minds from across the world to create a brighter future for children’s healthcare. The Clinician Scientist Fellows are being supported to focus on vital research to find new cures, treatments and medications for the biggest health problems facing children. In any one year there are approximately 20 fellows at various stages of their five year fellowship.

Professor Rick Leventer is one of the current Clinician Scientist Fellows. As a paediatric neurologist, Rick sees patients with all types of neurological disorders and has particular research interests in genetic diseases of the central nervous system that affect how the brain develops during pregnancy and in the first years of life.

“Before the fellowship, I was doing most of my research in my spare time and after hours as it was a struggle to find the time to do it effectively whilst trying to balance all my clinical duties,” said Rick.

Thanks to support from Henley Homes and Villawood Properties, Rick is able to further his work as both a clinician and a scientist with protected time to focus on his research. Through the Clinician Scientist Fellowship, Rick is able to offer patients and families seen in his neuro-genetic clinic, including those with epilepsy, the opportunity to be a part of research on early brain development, making a direct impact on his patient’s care.

Epilepsy is caused by a disruption to the electrical activity in the brain causing seizures. When a child’s seizures can no longer be controlled by medication and other treatment avenues have been exhausted, they may require surgery such as a hemispherectomy. This highly specialised process involves identifying the parts of the brain that are causing the seizures and undertaking a complex surgery to disconnect or remove this area. Part of Rick’s research involves analysing the brain tissue collected during these operations to find the cause of the epilepsy.

“As part of preparing the child and their family for this type of surgery, we work with the parents to seek their consent to be a part of our research with the hope that we can help other children in the future. With the parent’s permission, some of the brain tissue that is removed in surgery is saved and snap frozen in the operating theatre. We then take it directly to the laboratory for genetic and microscopic analysis where we try and understand why the brain may have developed abnormally to cause seizures.”

Through the fellowship, Rick and his team have already made some exciting breakthroughs, including identifying specific nerve cells that carry a genetic error which trigger epileptic seizures.

This has been a significant finding not only for medical professionals but also for parents of patients. By providing some families with an understanding of the cause to their child’s condition, this can give them comfort in knowing that their child’s condition was not preventable, and most parents can be reassured that the recurrence risk in future pregnancies is low.

Rick’s discoveries are also important for the future of children’s health, creating opportunities for further research into precision medicine to target the genetic error and guide the best surgical approaches aimed at the smallest amount of tissue necessary to control seizures.

Another significant benefit of the fellowship is that Rick is one of 20 champions of clinical research on campus, not only pushing the boundaries of patient care, but also mentoring younger clinicians who are interested in research by “paying it forward” to the next generation.

“The funds put in to support one clinician scientist are actually multiplied many times by the influence we can have on other researchers on campus,” said Rick.

“With this opportunity I am able to train younger researchers and supervise PhD students to inspire them to grow their careers and make new discoveries. I can connect with lab groups on campus, and other research groups nationally and internationally to share knowledge and findings.”

Thanks to the support from the Good Friday Appeal Charity House, clinician scientists at the RCH have dedicated time to advance the care of sick children in Victoria and beyond. 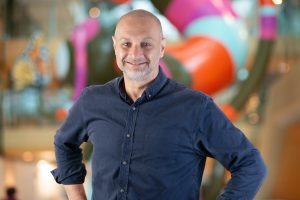