When a tumour she dubbed ‘Mr Potato Head” invaded Charlotte’s entire abdomen, the four-year-old endured chemotherapy and 28 hours of surgery.

Charlotte Alexander’s parents had heard the stories of miracles.

And so, with their young daughter’s life very much on the line, they put all their trust in the medical teams treating her.

An aggressive and rapidly growing tumour had taken up her entire abdomen, wrapping itself from the heart to the legs, and connected to blood vessels of every organ in between.

It took surgeons 28 hours of surgery, performed in two bouts over three days, to remove it, in the hardest tumour resection Royal Children’s Hospital surgeons have faced.

“This all hit when it was supposed to be the start of her letting loose,” dad Craig Alexander recalled this week.

“This was the first big Christmas that she understood the story around it. She was supposed to be at kinder. It was her time to shine.

“I just want her to be a kid and have a childhood.”

When you meet Charlotte, you understand why her dad and mum Jess never questioned her chances of survival.

“We ummed and ahhed, but we figured at the end of the day, regardless of the percentage, you’re never not going to go through with it,” Jess said.

“The treatment is either going to work or it’s not. There are always miracle stories out there. You still question, am I putting her through 18 months of very high intense treatment for no reason? But on the other hand, why wouldn’t you do it? … We put all our trust in them.”

Charlotte is a chatterbox and readily makes friends. Even if, for the time being, she’s having to swap the kinder sandpit for a tea party while hooked to an IV pole at the end of the oncology ward. 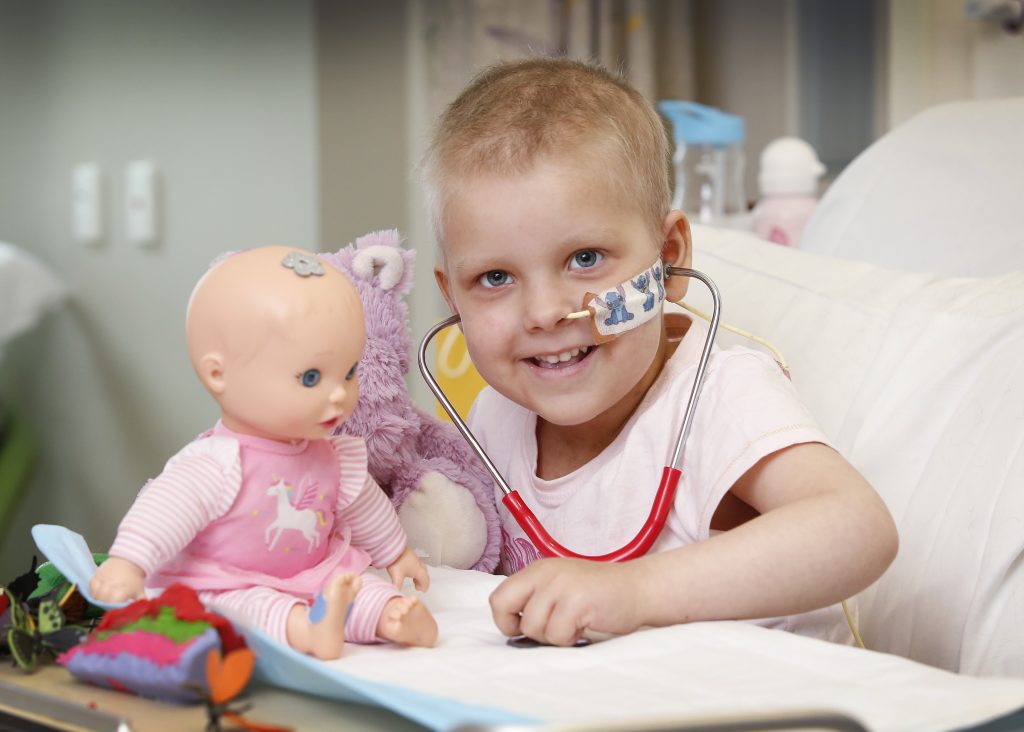 Charlotte plays with her doll while confined to bed after the surgery. Picture: David Caird

Charlotte is gutsy. On a good day she is dressed in homemade scrubs and a superwoman cape, patrolling the hospital corridors.

Not a weapon in the cancer treatment armoury is being spared. High-dose intensive chemotherapy, surgery, a stem-cell transplant, radiation and immunotherapy; her little body is hit by it all. There are encouraging signs about her response to treatment.

Charlotte started complaining of stomach pains and going off her food in July. It took numerous GP telehealth appointments and three trips to the RCH emergency department before the cancer was found.

It was an ultrasound that revealed there was a mass pushing all the organs in her trunk out of the way. Within a week, the then three-year-old had been assigned Jordan Hansford as her oncologist, had a Hickman line implanted in her chest so intravenous medicines could be delivered, a nasal gastric tube inserted, a bone marrow biopsy, more scans and started chemotherapy.

“There was no question about treatment,” Dr Hansford said.

“Enough kids do well that you need to pursue it. What that means is very aggressive treatment over 18 to 20 months, and it involves all the things that we do. Adults can’t tolerate the things we ask the kids to do.”

After chemotherapy, surgery was booked in for December 8. In Charlotte-speak, this surgery was to remove Mr Potato Head — the thing that was growing and making her tummy big.

She trusted her mum when she was told that, because her mum also knew the real reason she had lost her blonde hair — it was actually going on a holiday. But it would be back, Mum promised.

Paediatric surgeon Michael Nightingale expected it would take about 10 to 12 hours to painstakingly remove the tumour. A physiologist needed to be in theatre to monitor Charlotte’s spinal cord during the resection.

“The most important thing in taking out these sorts of tumours is that we don’t do any harm; we don’t damage her kidneys, liver or her spinal cord. We have to go very slowly and carefully,” he said.

They started operating at 8.30am. At midnight, and not even close to being done, they decided the safest option was to partially close her up, let her rest in intensive care, and then go in two days later for the final 13 hours.

“She had the most extensive tumour that we’ve dealt with at the RCH, certainly in the 10 years I’ve been at the hospital,” he said.

Scans taken before surgery showed the tumour was still active despite chemotherapy. Given surgeons reported the tumour felt “oozy and squishy” when trying to resect it, when typically chemotherapy turns tumours into “concrete”; everyone was worried. Charlotte finally gets to go home saying good bye along the way. Charlotte is hugged by her ward friend Luna Phillips as she says goodbye. The two girls struck up a friendship while being treated together on the cancer ward. Picture: David Caird

But a week after the surgery, Dr Hansford — wearing a Santa hat — left a meeting early to deliver the couple an early Christmas present. Microscopic analysis of samples taken during surgery showed the chemotherapy had worked.

“Have we been given hopeful signs along the way? One hundred per cent,” he said. “There is still a long way to go.”

Jess and Craig hung on to this good news as they watched their daughter relearn how to move her whole body again after a month on a ventilator.

Best-case scenario, Charlotte — who turned four during her latest month-long admission — was halfway through treatment. Radiation is next, followed by six months of immunotherapy.

From time to time over the past seven months, Charlotte’s parents have let themselves daydream about the future. Jess imagines her daughter being able to run under a sprinkler or dig in the mud, without worrying about the access port in her chest.

Ringing the gold bell at the exit of the oncology ward — a rite of passage for each child who finishes cancer treatment — is a recurring wish for Craig. Charlotte celebrates her 4th birthday in her hospital room unable to go out due to infection concerns. Charlotte with her parents Jess and Craig Alexander. Picture: David Caird