A spiked temperature and some bruising were the only signs last June that Hannah’s body was in a secret fight against Leukaemia.

Hannah Bradley hands the nurse an alcohol wipe and holds her plastic IV line still, ready for it to be changed.

“I help you,” she tells them, pointing to the syringe and clutching her doll with the other hand.

She is only two, but after eight months of cancer treatment she feels she has earned her stripes.

“We call her nurse-in-training here,” said dad Mark Bradley. “She’s very observant. She watches something a couple of times, then she’ll get the prep pads to help the nurses clean her lines.

“She quite enjoys it here. She enjoys the attention, I think.” It’s Hannah’s live-in-the-moment attitude and instinctual craving for interaction that still sees her seeking out play, connection and fun with other patients and staff on her Royal Children’s Hospital (RCH) ward.

A spiked temperature and some bruising were the only signs last June that her body was in a secret fight.

For a girl nicknamed “Bull”, such is Hannah’s habit of rough-and-tumble play, it was only when the fever persisted that a trip to the nearest hospital at Kyneton made sense. The directions were clear; this ambulance will take you straight to the RCH.

Two hours later a diagnosis of ALL, Acute Lymphoblastic Leukaemia, was confirmed and two and a half years was the treatment time frame Mark and wife Sharlee were given for their youngest daughter. Hannah has spent four of the past eight months in hospital.

“It’s been a journey so far, and there’s a long way to go,” said Mark.

“But the doctors and nurses have been amazing and she’s taken to the treatment really well, even though there are ups and down that go along with a little body being smashed with a lot of chemotherapy. I just wish for some normalcy for her now.” 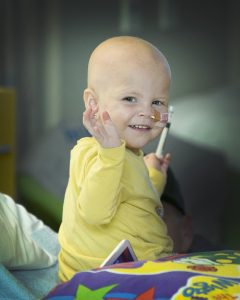