Samuel had life saving surgery when he was barely a day old after it was discovered the lower end of his digestive tract hadn’t developed properly.

From the first week of Samuel Edwards’ life, a healthcare army has been mobilised to carry out a trio of complex medical missions.

The 12 month old had his first lifesaving surgery when he was barely a day old.

To parents Courtney Toms and Steve Edwards, their first born looked just as they imagined.

The only first sign that the lower end of Samuel’s digestive tract hadn’t developed properly was when he had still not had his first bowel movement on his second day of life.

By this stage the newborn was bloated and the build up of toxins was quickly becoming a medical emergency.

Samuel was rushed to The Royal Children’s Hospital (RCH) for a stoma to be implanted, buying them time for a more permanent fix.

“Unless you were looking, you wouldn’t know, so it came as a big shock,” Ms Toms said.

By the time the couple could take their baby home after spending three weeks in intensive care, it had been found Samuel also had heart and kidney defects.

He will receive treatment for those conditions later, but at the moment he is a patient at RCH’s newly formed colorectal and pelvic reconstruction service.

The unit was set up by paediatric surgeon Associate Professor Sebastian King to ensure a whole team of doctors, specialist nurses and therapists could give children with complex bowel conditions complete care.

Given Samuel will be a patient at the RCH for his entire childhood, with further surgery on the cards, it is just as well he enjoys the attention and care he receives.

He flaps his arms and shrieks whenever he joins the line for COVID screening to get into the hospital.

“They’ve become like family here at the hospital. They care for Steve and I just as much as they care for Samuel,” Ms Toms said.

After a procedure to reverse the stoma did not work, Samuel will now be given time to recover before his care team regroup in the next few months to decide the next plan of attack.

“Either way, if he has the stoma or not, I just want him to be happy and to find acceptance,” she said. “When you’re older all of this stuff can make someone different. I just hope that he doesn’t face that.” 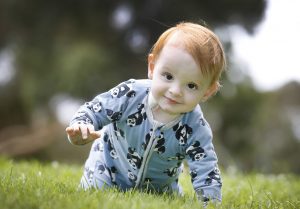