After suffering a serious brain injury, 11 year old Joe Dwyer’s life was placed in the hands of the RCH’s skilled neurosurgeons. Luckily for Joe, they were using the most advanced neurosurgical technology available.​ Joe on his last day in PICU

Joe’s day started out like any other, with parents Naomi and Evan dropping him off at primary school one March morning. While playing cricket with his friends during lunch, Joe started getting a headache and took himself to sick bay. When he arrived, his condition changed rapidly. He felt disoriented and began vomiting uncontrollably. An ambulance was called and Joe was rushed to the RCH Emergency Department.

After being taken for an MRI scan, Naomi and Evan were told Joe needed immediate brain surgery. They waited through the afternoon and into the evening as Joe’s surgery went on. Finally, at 1am Joe’s neurosurgeon Dr Patrick Lo came out to see them.

“He’s alive,” Patrick reassured them. “But you should prepare for a long stay”.

Joe had suffered a haemorrhage of an arteriovenous malformation also known as a tangle of abnormal blood vessels in his brain, and at this early stage it wasn’t known if he’d have permanent damage.​

Over the next week, Joe remained in the Paediatric Intensive Care Unit (PICU) and underwent two further surgeries where Patrick used the latest technology available to conduct delicate and accurate brain surgery, including the IMRIS and intraoperative craniospinal navigation system, generously funded by the community through the Good Friday Appeal.

“Patrick described his first operation to remove the blood vessel tangle as ‘war’ surgery. In the final surgery, he went in with a comprehensive map of Joe’s brain to check every blood vessel, which was very successful,” said Evan.

This comprehensive mapping was the work of Dr Joseph Yang, Clinical Research Fellow in Paediatric Neurosurgery and the lead scientist for the NACIS at the RCH. With generous community support, for the past 10 years, Joseph has been researching the integration of MRI techniques known as “tractography” into neurosurgical procedures. This has ensured the skilled neurosurgeons using neurosurgical equipment are guided by the latest research.

With his surgeries complete, Joe was transferred from PICU to Cockatoo, the neurological and rehabilitation ward where he stayed for a further two weeks. At this stage Joe had a left side deficit which affected his eyesight, arm and leg movement. Evan and Naomi credit Joe’s extensive care team for his steady improvement. 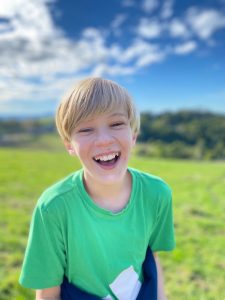 “After the stay in PICU, I remember Joe saying ‘this is like camping in a really bad place with really lovely people’, which was definitely true. The neurosurgery team, the nurses, doctors, allied health staff, social work team were just phenomenal and provided minute by minute support,” said Evan.

After a further two weeks, Joe was able to go home to his family, but remains an outpatient with regular physio and occupational therapy appointments.

“After we left hospital, we thought of ways we could thank the team and the hospital for saving Joe’s life. By getting in touch with the RCH Foundation we found out that Joseph’s research needed additional funding, so we are supporting his work as the Clinical Research Fellow in Paediatric Neurosurgery,” said Evan.

Six months on from the incident, no one could pick that Joe spent a month in hospital with a serious brain injury.

“When Joe was lying in PICU we never thought we’d get to this stage, but Joe is back to his energetic self. Each day he gets stronger and stronger, both mentally and physically. Two months after the incident, Joe was back part time to school, and six months later he is now back to learning full time,” said Evan.

Learn more about the neurosurgical suite of equipment ​