There is a towering tree at Milla Gooch’s kindergarten that is named after her. Milla Gooch, 8, with her sporty prosthetic leg, as well as all of her older legs as she has grown. Picture: Alex Coppel.

Each year when a new group of children begin, daunted by what they can achieve, teachers tell them the story of their star bush kinder graduate who – with a prosthetic leg – has been one of the only ones to climb this giant tree. If Milla can do it, so can they, the kids are told.

“Everywhere we go people are just amazed by her, but I see it every day so sometimes I have to step back and reflect that she’s so independent, happy and confident,” mum Brooke said.

It was a daunting decision to follow the advice of Royal Children’s Hospital orthopedic surgeons and have their 11-month-old daughter’s right leg amputated after she was born without a shin bone and ankle. 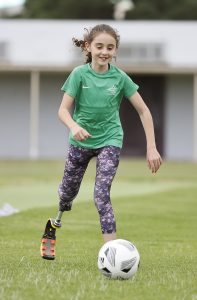 Doctors assured Brooke and husband Shane that despite this rare ­congenital abnormality called tibial hemimelia, they would be amazed at what their daughter would achieve with a prosthetic leg. And they were not wrong.

Milla, now aged 8 and a frequent flyer at the RCH for regular check-ups to keep her body strong, has recently been fitted with three new legs. She now has her first waterproof swimming leg, an athletic blade and an upgraded everyday leg.

“It’s changed her pace so she can keep up with the other kids,” Ms Gooch said.

“She’s riding a bike, she has started soccer and participating in the school cross country … She doesn’t think twice about it. She just has a go.”

Donate to the Good Friday Appeal ​