With every new word or skill Isla Hulm learnt in her first year of life, there was a worrying nag in the back of her parents’ minds that she was using up valuable brain space.

But now, after radical surgery to correct the shape of their daughter’s skull and free her rapidly growing brain, Matilda Gribble and Kieran Hulm are relishing the chance to watch their firstborn thrive.

“It’s comforting to know that little brain can grow as much as it needs to now, and we can watch her progress freely,” said Matilda.

Isla’s prominent forehead was mentioned by a pediatric specialist after birth, but given this feature also runs in the Gribble family they put this down to pedigree and got on with enjoying their baby.

It wasn’t until an osteopath and private maternal health nurse suggested the shape of Isla’s head warranted further investigation, and a referral to The Royal Children’s Hospital (RCH) was made, that they learnt Isla faced surgery.

Over a telehealth appointment, the specialist took photos of the then eight-month-old’s head from all angles, and the word “craniosynostosis” was first mentioned.

This rare birth defect ­occurs when the plates of the skull fuse too early and cannot slowly move apart over the first few years of life to make space for the developing brain. 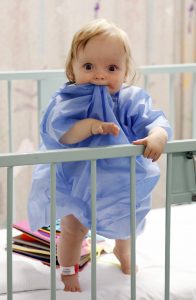 Isla waiting to go into theatre for her surgery.
Picture: Alex Coppel.

Without surgery, pressure inside the brain builds up and the condition is fatal.­­

Surgeons have a small window to intervene. The child needs to be strong and old enough to tolerate such major surgery, but also young enough that the remaining ­sutures have not fused and the skull bones are still soft.

Jonathan Burge, head of craniofacial surgery at the RCH, said he originally thought that when tests showed Isla had increased pressure in her brain, it was an inaccurate reading given how young she was. But once inside they could confirm the ­results were correct.

The distorted skull shape was already causing her vision to be blurred and the optic nerve – which connects the eyes to the brain – to become swollen. Veins draining fluid from the back of her brain were compressed, further increasing brain pressure.

Up to 80 children have ­cranial vault surgery – to correct skull shape to allow normal brain growth – at the RCH each year. But the version that Isla needed, which called a posterior vault reconstruction, is less common. 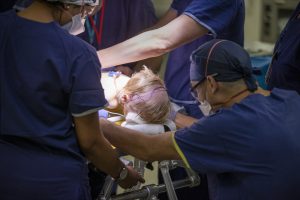 Isla needed a full reconstruction of the rear of her skull. Isla being operated on in theatre.
Picture: Alex Coppel.

Over seven hours, with Isla lying face down on the operating table, Mr Burge removed the back portion of her skull.

He used a titanium model of an ideal skull shape – an ­invention he helped create based on the head shapes of 62 children – to devise a mould of an average skull shape for an 11-month old.

This piece of posterior skull bone was cut into five pieces and put back together like a jigsaw puzzle to closely model the ideal shape, but also leave enough room for her growing head and brain to fill it out.

“You have to look at the anatomy of the head; firstly what part of the brain is being compressed, and secondly the shape of the head and where you can gain space without ­affecting the look,” Mr Burge said. “You’ve got a set of surgical skills and tools in your box and you have to think about what ones you want to apply to each baby.

“You don’t just want the perfect shape in a reconstruction; we over-expand it.

“We rely on the sutures of the bone (to create the right head shape) up until about three years of age, but after that we think we’re not so ­dependent on them.

“Our style of growth in the skull changes, so we just try to jump-start them to that stage where they can start growing in a different pattern.” Isla after surgery recovering in the ward. Picture: Alex Coppel.

Isla came into the world a curious and alert baby, who wanted to be part of everything.

She never liked to be cradled like other infants, instead wanting to sit more upright for a better view of the world. She learnt sign language to ask for milk at six months of age.

Before surgery Isla was not far off walking. She continued to learn new words during her week-long recovery in hospital – “page”, “wow” and “hello nurse” – a reassuring sign to her parents that their little girl is raring to get back to learning and living.

“We were both so ready for her to have this surgery done,” said Mr Hulm.

“She’s a child who is always looking around, trying to learn something new and I want her to be able to keep doing that.

“I don’t want to worry that every time she says a new word thinking, ‘That’s great, but you need to stop learning things to save that brain space’.

“I wish for her that we can put it behind us a little bit and have a bit more fun as a ­family,” he said.