Over six weeks – from 31 weeks gestation when the first abnormality was detected, through to his second week in the outside world when he underwent life saving surgery – Nadia and Joe Polidano rode a rollercoaster of doomsday scenarios for their son. 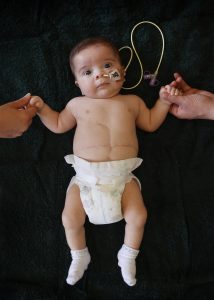 They were initially told to prepare for losing their baby before birth after scans suggested he had the rare abdominal birth defect.

When further scans suggested a more complex problem, they braced for taking home a seriously ill child who faced surgery and a devastating syndrome.

But Luca remained a boy who was put together with puzzle pieces collected from different boxes.

There was something unusual about his fragility and the position of his major organs that doctors couldn’t quite work out before birth, given the limitations of scans in utero.

And yet even when Luca’s true diagnosis was revealed to The Royal Children’s Hospital (RCH) surgeons when they could first peek into the newborn’s chest, there would be no guarantees for the Oak Park couple that their premature son would make it through the operation needed to save his life.

“Our hearts stopped that day we got that first bad news,” said Nadia.

“Now four months later, with our boy home, we wish we could have known it would all work out.

“Everyone kept telling us if he makes it to the RCH, he’s probably going to make it.

“We’re so grateful to the hospital for making this wish come true.”

Luca was in a bad way when he was born, with his heart working overtime.

After being transferred to the RCH after straight after birth, Luca was wheeled into theatre on day six of life for a two-part investigative surgery with renowned neonatal surgeon Joe Crameri.

It was discovered a huge tumour, a teratoma, had burrowed through the back of Luca’s diaphragm and was taking up two thirds of the abdomen and chest cavity.

This mass had disturbed all the developing organs around it – the heart, lungs and major blood vessels in the liver.

Mr Crameri had never seen this type of tumour of this size and in this unusual spot.

The ideal situation was to wait until Luca was four weeks old for the surgery, but at two and a half weeks, it was getting harder and harder to support his stressed lungs and heart.

“We knew we had to take the risk and get this out now, otherwise we may be in a position where he wasn’t strong enough at all to tolerate the operation,” said Mr Crameri.

Over eight hours, Mr Crameri and paediatric surgeon Michael Nightingale moved all the major organs out of the way to meticulously resect the tumour.

The operating theatre erupted into applause when the 200g benign mass was removed all in one lump. 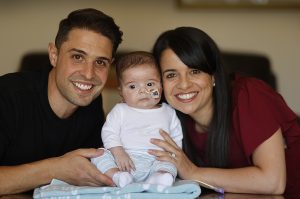 Luca’s mum Nadia and dad Joseph by his side. Picture: Alex Coppel.

“As much is was the worst day of our life, we say it was one of the best days as well,” Nadia said.

“There were so many obstacles and hurdles that had to be overcome, but he made it through. Our boy was tumour free.”

After almost 10 weeks at the RCH, the Polidanos are soaking up the simple joys of having their precious boy home.

“In saving Luca’s life they’ve saved our lives, because we were just going to be broken without him.”