Jeanette Tarascio has fond memories of her dad, Ray Warfe, a man she affectionately refers to as her hero. So, when Jeanette was writing her own Will, she wanted to honour her dad and decided to create a gift in his name to celebrate his incredible life.

“Dad was one of 10 children. When he was a young man, he enlisted in the Second World War with two of his brothers – Verdun and Bill,” said Jeanette.

“At the time, he was actually too young to enlist. He went along with his brothers anyway, one of whom was 12 months older than him. They told them both to take a walk around the block and come back as twins. So, they did – it was in the newspaper at the time,” she added.

Ray was sent to Tobruk as a frontline medic, as part of the 2/5th Australian Field Ambulance. His older brothers were in the same unit. Along with 14,000 other Australian soldiers, Ray fought bravely in the Siege of Tobruk in Libya.

Forced to endure eight long months in dug-outs, caves and crevasses like rats, they withstood constant enemy fire, searing heat and bitter dust storms. Affectionately naming themselves ‘the Rats of Tobruk’ after their circumstances, the soldiers became a source of inspiration at the height of the conflict.

“Dad and his brothers all thankfully came home from the war, but they were expected to go back and live their lives as normal, which was really hard, especially after what they had experienced,” said Jeanette.

Thankfully for Ray and the other soldiers who were in Tobruk during the siege, the Rats of Tobruk Association was formed in the mid 1940s, with branches and subbranches established throughout Australia. In the years after the war, the Rats of Tobruk Association become a place for veterans to connect, share stories and continue their famous mateship.

“It gave them a place to spend time with people who knew what each other were going through,” said Jeanette.

Ray with one of his grandchildren

“The Rats would hold regular functions at their Hall in Albert Park which I would go to with Dad, and myself, my sister and her children are all Junior Rats,” she added.

In 2010, the Rats of Tobruk Association began supporting the RCH, presenting a cheque for $1.5 million, generously donated from the sale of their Albert Park meeting hall in 2007. Held in perpetuity by the RCH Foundation, this donation established the annual Rats of Tobruk Neuroscience Fellowship, which provides a unique training opportunity for up and coming neurologists within the RCH’s Neurology Department.

When Ray passed away in 2010, Jeanette knew she wanted to do something special to acknowledge him and all the sacrifices he had made as a Rat of Tobruk. She decided to leave a gift to the RCH Foundation in her Will, which will be directed to the Rats of Tobruk Association Neuroscience Fellowship Fund and support future fellows.

Jeanette’s 1870 Society Membership, which celebrates supporters who have included the RCH Foundation in their will, is also recognised in her dad’s name – In honour of Ray Warfe, 2/5th Field Ambulance, Rat of Tobruk.

For Jeanette, being able to acknowledge her dad in this way means a lot to her.

“My dad was my hero – often times a silent hero – so being able to leave a legacy in his name means so much to me,” said Jeanette.

“Nine years ago, not long after the Rats had announced the Fellowship, my grandson fractured his skull and ended up on Cockatoo, the RCH’s surgical and neurology ward. As a spiritual person, I felt like this was Dad’s way of saying he was there to look after him.”

“He would be so happy knowing he is being honoured in a way that is supporting future outcomes for young children,” she added. 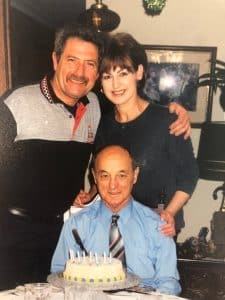 Jeanette (right) with her late husband Joe (left) and Ray