The story so far

In July 2003, Charlotte was diagnosed with Non-Hodgkins Lymphoma. She was 4 years old.

She had very intensive chemotherapy for six months then relapsed 6 weeks later. The relapse was almost as devastating as the initial diagnosis. Further treatment continued and another two relapses. Charlotte continued treatment for the next 3 years almost continuously as an inpatient of the RCH.

Several friends initiated Live Music in Hospitals and raised a considerable sum towards supporting Music Therapy. Some friends from Mt Eliza were keen to become involved but distance and young children made it difficult to join LMH.

During this time I found support and friendship through the Auxiliaries Office. Sue Manson encouraged us to form a Peninsula Auxiliary to support Music Therapy in the Hospital.

Our first meeting took place in 2004 and it was decided to name our auxiliary “Charlis Angels”. Over the years, the Auxiliary has raised funds for Music Therapy and the Children’s’ Cancer Center.

Mostly we try and have fun and raise money at the same time. Some years we have quietly plodded away and other times we have been quite adventurous!

Members have come and gone but the group remains active and supports its members.

What we are working on

Charli’s Angels runs a wide variety of charity events around the Mornington Peninsula to raise funds to support the Pain Management team and provide funding for purchases for distraction therapy, focusing on the Music Therapy department of the RCH. 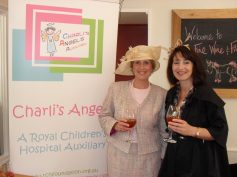