Melbourne Dad Terry Sefton is using his locks for good, encouraging others to sport the distinctive mullet style to raise funds and awareness for The Royal Children’s Hospital (RCH).

For Terry, starting the fundraiser Mullets for the Kids was a no-brainer.

“My family spent a fair bit of time at the hospital with our young fella when he came into the world, and what stands out is just how amazing and passionate their doctors, nurses and specialists are.”

When his young son developed a natural mullet before having his first haircut, Terry decided he wanted to be a cool dad and grow one too. “That wasn’t going to happen in my household unless I came up with a concept, and that’s when Mullets for the Kids was born,” said Terry.

Since its establishment in 2017, the community of 30 mullet-growers have raised $35,000 for the hospital, ensuring excellence of care and support for Victoria’s most sick and vulnerable children. One of the youngest, and most passionate mullet growers is 12-year-old Darcy Cross.

Lynden Dunn has been working on his mullet since late 2018 after a visit to Beefs Barbers in Richmond, who suggested the iconic look to support the Mullets for the Kids initiative. “If we are able to make any difference by raising money for the RCH then that is just the icing on the cake,” said Lynden.

Mullets for the Kids are celebrating their second birthday with a fundraising event on Saturday 31 August. Family, friends, footy players and supporters are all welcome to this fundraising event for the RCH which will include raffles and a BBQ. Learn more here. 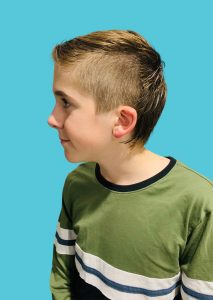 12-year-old Darcy Cross with his mullet