In 1941, as the world was at war, a group of friends in a pub in Auburn decided to raise funds for children requiring orthopaedic support at The Royal Children’s Hospital (RCH) by foregoing the cost of a round of beer per week (which was a shilling, known as a bob). At that moment, these men made a commitment to support the RCH and nearly 80 years later are one of Good Friday Appeal’s longest standing supporters, raising over $18 million.

“The original commitment was simple, a membership fee of “one bob” or a shilling a week to join, and Uncle Bob’s Club (UBC) was established in 1942. It didn’t take long before clubs were established across Victoria, and we’re now proud to welcome thousands of volunteers from across the state,” said Paul Etherington, President of UBC.

UBC’s fundraising efforts now culminate on Good Friday, when their network of dedicated volunteers are mobilised throughout the state, rattling tins on street corners and road strips, and supporting activations at Kid’s Day Out. The organisation also collaborates with Victoria’s first responders for the Metropolitan Fire Brigade (MFB) and Country Fire Authority (CFA) Treadmill Challenge held over 14 hours in Bourke Street Mall in support of the Good Friday Appeal.

“I think without volunteers you wouldn’t see half the equipment which you see around here. Our children are our future, if we can’t support them through our volunteer activities, what else is there?” said Paul.

The impact of funds raised has been extraordinary. Over the past 78 years, UBC support has ensured that the hospital has remained at the forefront of medical research and treatment. Thanks to UBC support, the RCH was able to purchase its first heart-lung machine in 1958 and in 1969 the Uncle Bob’s Child Development Centre was established.

The organisation currently supports three projects across the hospital; Uncle Bobs Travelling Scholarship which provides clinicians with funding to attend overseas training opportunities, Uncle Bobs Neurology Fellowship to attract and train the best clinical minds by supporting aspiring neurologists and the RCH Early Learning Intervention Centre which cares for children with a developmental delay or disability.

“We’re truly inspired by the incredible work of teams across the hospital. We have been supporting children’s health at the hospital for nearly 80 years and over this time we have raised over $18 million for the Good Friday Appeal. We are very proud as a Victorian based club to be helping Victoria’s children and this is what motivates us to continue volunteering and fundraising. Our work would not be possible without our members and supporters including 7-Eleven, Freemasons Victoria, CFA and MFB who volunteer with us,” said Paul.

The reach and impact of the Good Friday Appeal would not be as great if it wasn’t for the support of UBC we thank them for their dedication to the children of the RCH. 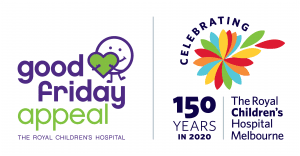