Ken Bassett was a hardworking man, who was kind, generous and loved his grandkids more than anything else. It was this love and compassion that led Ken to leave a generous bequest for The Royal Children’s Hospital – a gift that will ensure thousands of patients at the hospital with an acquired brain injury (ABI) get the most advanced care possible.

“Dad was an incredible man. He was soft natured and throughout his whole life was so content with working hard to provide for his family,” said Louise, Ken’s youngest daughter.

“He was a truck driver by trade, before becoming a transport engineer, however farming was always a passion for him. When he officially retired, he bought several hundred acres near Echuca, built a house and made the most of his time on the farm.”

Louise explained the only thing Ken loved more than cars and farming was kids.

“Dad adored children and was lucky to have seven grandkids. Sadly, his first grandchild, Madison, was born sleeping in 1996, which was something that stuck with him,” said Louise.

“When we talked about his Will, he would tell us that he wanted to give money to the RCH as a way to honour Madison. While she wasn’t a patient at the hospital, I think it was Dad’s way of acknowledging that she was still an important person in his life, so this was something he could do in her memory.” Ken on his farm

Ken’s generosity will support an innovative multi-staged project that will cement the RCH as a global leader in the delivery of evidence based practice for children with severe ABI. An ABI occurs as a result of damage to the brain and encompasses any type of brain injury that occurs after birth. The most common causes of an ABI include traffic accidents, falls and sporting accidents.

As one of the leading trauma centres in Victoria, the RCH treats hundreds of patients with an ABI each year, and these injuries can have a long lasting impacts.

Thanks to Ken’s gift, Adam and his team will undertake dedicated focus groups with clinicians and patient families with lived experiences to identify current gaps in care for the very early stages of the ABI journey.

“Clinicians do an amazing job in saving the lives of the children. This work is focused on what happens when the patient is stabilised and they’re moving out of intensive care and onto the rehabilitation ward. This is when they are starting this tough journey of recovering through the hospital system,” said Adam.

“We will be able to ensure children admitted to the RCH with severe ABI receive the best care as an inpatient, and their families feel well supported, which in turn will help to minimise the ongoing impact on both the patient and their family,” he added.

“I am proud that Dad’s legacy will live on through such an important piece of work. Living in the country, Dad would hear about many accidents that result in an ABI, like kids falling off horses or farm machinery malfunctioning so I know this work would have resonated with him. I also know that he would be happy to know that his money will not only honour Madison, but it will also help many children with an ABI,” said Louise. 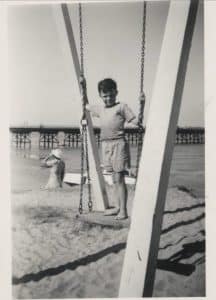 Ken as a young boy